We pause for a public service announcement from the Justaminutemen 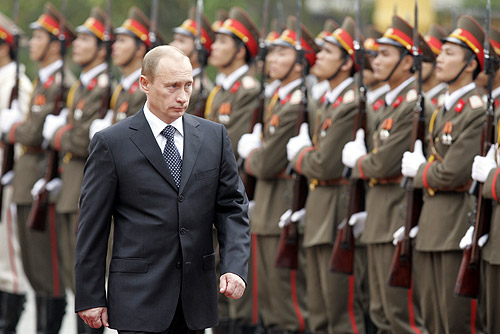 Are you ready for World War III?

We of the Justaminutemen are calling for volunteers to join the fray, as Field Marshall Putin seeks to establish the Putinphate, which everybody knows stretches from Vladivostok to Latakia in Syria, one of the former Soviet Socialist Republics before it fell on hard times, as Kremlin scholars can prove.

Field Marshal Putin is drafting 150,000 new boots on the ground.

30 Russian planes flew 50 sorties in the first day of the Field Marshall’s new Five Year Plan to come to the rescue of the beleaguered friends of good governance in Damascus. Theoretically, in bombing what’s left of that Allah-forsaken Assadland, the Russians in the name of stopping ISIS are hitting some of the good or bad guys, whoever they might be. With so many different factions at war, even a scorecard wouldn’t help smart bombs sort them out.

With Saudi, Jordanian, French, British, Turkish, Israeli and U. S. planes already dropping bombs, the dangers of the air war are escalating.

With all due respect, we don’t know how well trained some of the Arab countries pilots are. Given the Saudi’s latest coup of bombing that wedding party in Yemen to smithereens, as well as hitting the same consumer products factory five and six times, there is reason to suspect training and intelligence.

Even with the best of training and intelligence, there is collateral damage. When we carpet bombed Normandy France in World War II, tens of thousands of Frenchmen in the villages were casualties. We couldn’t kick the Germans out of Caen, so we leveled it. That happens in war. That’s the agony that goes with the joy of winning.

With all of these bombing runs, the chances of some country’s ace getting into a dogfight with another’s ace is heightening. Of course, nobody will give the order to shoot down an ally’s plane. But the skies are filled with pilots, some of who are rusty, and are in the battle just for the target practice. It’s easy to see some pilot’s radar malfunctioning from poor maintenance, thinking “I’d better get him before he gets me.”

Losing a plane could be a humiliation to one sensitive ally, requiring revenge.

In a worse case scenario, the Russian high command gets words a Saudi jet shot down one of its planes, believing it was French, British, Turkish (fill in coalition partner), and we’re off to the races.

Vegas could be taking odds on whose going to do IT to whom, starting the mother of all conflagrations. I bet some smart young entrepreneur sitting in a garage is going to see an opportunity for a fantasy World War III game, like fantasy football.

It’s not fantasy, though. Look, these countries have been arming themselves for years. They all have the latest sophisticated conventional warfare weaponry, ground- to- air missiles, missiles- to- missiles. And the beauty part, most of it supplied by our military-industrial complex.

Once they start throwing all of this stuff around, it’s not going to stop.

And then you have the nuclear element. Who knows, Iran may actually have the bomb already. The Saudis can go to Pakistan for a bomb to protect them from the Iranians. After all, Saudi money paid for the Pakistani research. There might be some fine print in he contract, regarding preferential treatment in leasing a bomb in time of emergency. Once they start going nuclear, it’s the end game.

The biggest hope against the Middle East going nuclear was explained to me by economist Dennis Ainsworth. “The entire region’s economy is based mostly on one product: Oil. If it’s radioactive, can you sell it in the marketplace?”

What we need to worry about here is the theory of unintended consequences. I still remember Secretary of State Dean Acheson making a speech declaring Korea was outside “our sphere of influence.” Without realizing he gave North Korea the green light to invade South Korea. 50 years later, the Korean War is still not over.

I am also reminded of the lunatic who shot the Archduke Franz Josef in Sarajevo. The guy was in a bar having his morning slivovitz or three. Stumbling out of the bar, there was the archduke‘s open touring car, stuck in a street to narrow to turn. The driver didn’t have Googlemap in 1914. Over 37 million people died in World War I.

Who’s going to settle differences in the air and ground war in Syria?

Forget the UN. They can’t settle anything. Half the delegates come back drunk after those six martini lunches, their major achievement, besides causing traffic jams.

None of our Republican candidates running for president are thinking about how to get us out of this mess the Democrats and Obama obviously got us into. All they can think about is abortion and how to prevent people from getting health insurance. It’s scary.

We of the Justaminutemen are sorry to have ruined your weekend by giving you this food for thought --and indigestion.